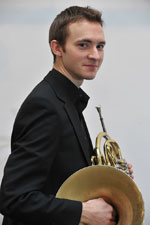 As a chamber musician, Frank-Gemmill has performed at festivals in Scotland, Norway, Germany, France and Estonia. Highlights include playing the Brahms Trio and Mozart Quintet K. 407 at Wigmore Hall, as well as the Mozart and Beethoven Quintets for piano and winds with Kristian Bezuidenhout on period instruments. Frank-Gemmill is Professor of Horn at the Guildhall School of Music and Drama; he is the recipient of a Borletti-Buitoni Fellowship and was named a BBC New Generation Artist in 2014.