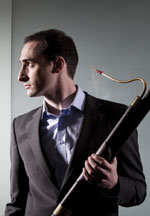 Peter Whelan was Principal Bassoon with the Scottish Chamber Orchestra from 2008 to 2017. Equally at home on modern and historical instruments, Whelan has a diverse repertoire spanning over four centuries and is in constant demand as a soloist and chamber musician. He has received glowing responses from audiences and critics across the globe, including a Gramophone Award for his recording of the Vivaldi Bassoon Concertos with La Serenissima. Whelan is also Principal Bassoon with the Orchestra of the Age of Enlightenment, with whom he premiered Michael Gordon’s Bassoon Concerto in May 2016.

Whelan is the founder and Artistic Director of Ensemble Marsyas, whose debut album of Zelenka’s Sonatas received a Supersonic Award. This album, along with their second album ‘Quartets and Concertos’ by Johann Friedrich Fasch, were named ‘Chamber Choice’ by BBC Music Magazine. Whelan has also recorded Weber’s Bassoon Concerto with the SCO.

Whelan has collaborated with the Belcea Quartet, London Winds, Robert Levin, Anthony Marwood and Monica Huggett, and he appears with Tori Amos on her album ‘Night of Hunters’.

Whelan is Professor of Baroque Bassoon at the Guildhall School of Music and Drama and gives masterclasses at conservatories across the United Kingdom and Europe.