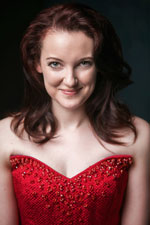 Winner of the 2018 Critics’ Circle Emerging Talent (Voice) Award, Jennifer France enjoys a growing reputation as an outstanding performer of contemporary music, receiving critical acclaim for her performances as Ophelia in Brett Dean’s Hamlet for Glyndebourne On Tour, which led to an invitation to give the première performance of his And once I played Ophelia with the Swedish Chamber Orchestra.

Similarly, her work with George Benjamin on the première production of his Lessons in Love and Violence at the Royal Opera House, Covent Garden (and then at the Dutch National Opera) led to an invitation to perform his Into the Little Hill at the 2020 Festival Présences Radio France. She created Ice in Stuart MacRae’s Anthropocene for Scottish Opera, later singing the première of his Prometheus Symphony with the BBC Scottish and leading on from her performances as Her in the UK première of Pascal Dusapin’s Passion with Music Theatre Wales made her debut at the 2019 Salzburg Festival singing his Medeamaterial. She sang Alice in Gerald Barry’s Alice’s Adventures Under Ground for the Royal Opera, London, and made her debut with English National Opera as The Princess in Philip Glass’ Orphée.

In addition to performances with Britten Sinfonia, her concert engagements have included programmes with the Academy of Ancient Music, the BBC Symphony Orchestra, the City of Birmingham Symphony Orchestra, the Hallé, Huddersfield Choral Society, the London Mozart Players, the London Sinfonietta, the Philharmonia Orchestra at the Three Choirs Festival, St James’ Baroque, the Deutsche Händel Solisten, the Orchestre de Chambre de Paris and the Israel Camerata.