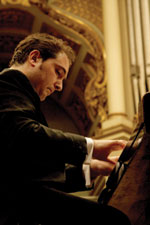 Melani Mestre has a repertoire of over forty concertos, including many works by Spanish and Ukrainian composers, as well as concertos by Piazzolla, Scharwenka, Medtner and Paderewski, and he champions little-known repertoire as both pianist and conductor. He has collaborated with renowned artists including Ivry Gitlis, Ruggiero Ricci, Martha Argerich, Lorin Maazel, Roby Lakatos, Giora Feidman, Valentin Gheorghiu and Al Di Meola. Mestre was appointed chief conductor of the Lviv Symphony Orchestra in Ukraine in 2007, with whom he has toured extensively; since 2008 he has also held the position of Artistic Director of the International Lviv Summer Music Festival, ‘Improvizacia’, working with world-class soloists including Andrei Gavrilov and Wojtek Mrozek. Melani Mestre is also principal conductor of the Orquesta Filarmonía Ibérica, and is invited as guest conductor at some of the most distinguished orchestras around the world.

At the age of twenty-five Mestre was appointed professor of piano at L’Escola Superior de Música de Catalunya (ESMUC), giving master-classes and presentations at academic institutions around the world, combining his concert activities with teaching and musicological research. His editions of works by Granados, Albéniz and Joaquim Malats are published by Editorial Boileau of Barcelona, who also publish Mestre’s own compositions.

Melani Mestre is a member of the Sociedad Española de Musicología and is a Steinway Artist. 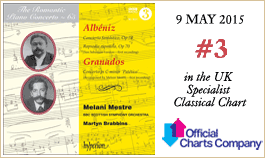