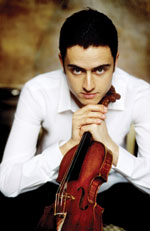 The exceptional young Russian violinist Eugene Ugorski has already amassed a wealth of international experience at the highest level. His playing has a wonderful technical ease and youthful exuberance. His rich, dark tone is resonant of the old Russian school of violinists and marks him out from his peers. Ugorski has already performed throughout Western Europe, Russia, Canada, the USA, South America, Australia and the Far East, working with conductors such as Hans Graf, Andrey Boreyko, Roberto Minczuk, Yannick Nézet-Séguin, Kirill Karabits, Vasily Petrenko and Robin Ticciati.

Following his performance at the 2005 Moscow Easter Festival, Valery Gergiev immediately invited Ugorski to appear with the Rotterdam Philharmonic. Since that time, Ugorski has gone on to work with, amongst others, the Los Angeles Philharmonic, Houston Symphony, London Philharmonic, BBC Symphony, Strasbourg Philharmonic, Deutsches Symphonie-Orchester Berlin, Dortmund Philharmonic and Tokyo Metropolitan Symphony orchestras. Ugorski stepped in at short notice for an indisposed Leonidas Kavakos, performing Stravinsky’s Violin Concerto with the Rotterdam Philharmonic and Robin Ticciati. With the Netherlands Radio Philharmonic, Ugorski gave the Dutch premiere of the little-known violin concerto by Mieczysław Weinberg, and in 2012 he performed John Adams’s Violin Concerto with the Basel Sinfonietta.

As a recitalist Ugorski regularly collaborates with pianist Konstantin Lifschitz. They made their debut together at the Mecklenburg-Vorpommern Festival in Germany to great acclaim in 2008, and have since appeared at the Enescu Festival in Romania, Seoul Arts Centre and Perth International Arts Festival in Australia, as well as giving debuts at the Tivoli Festival in Copenhagen, Wigmore Hall in London, Lucerne Festival, the Beethovenfest in Bonn and De Doelen in Rotterdam.

Born in 1989 in St Petersburg, Eugene Ugorski moved with his family to San Diego at the age of five. He began studying the violin at the age of six with Professor Vesna Gruppman and made his orchestral debut with the San Diego Symphony Orchestra at the age of eight. He continues to study with Vesna as well as with Igor Gruppman, one of the world’s most respected concert-masters. 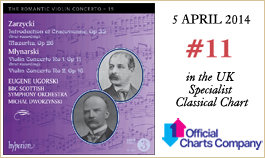