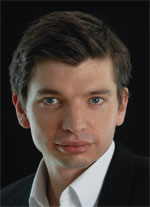 Callum Thorpe began his musical training as a chorister at Coventry Cathedral and subsequently studied opera at the Royal Academy of Music, graduating with distinction.

Operatic highlights include Mozart’s Don Giovanni (Masetto) for Glyndebourne on Tour, for Garsington Opera and at the Birgitta Festival in Estonia, Handel’s Theodora (Valens) for Les Arts Florissants in Paris, New York and Amsterdam. Other highlights include Mozart’s Die Zauberflöte (Sarastro) and Verdi’s Macbeth (Banquo) at Theater Basel and Rameau’s Platée (Jupiter) at St John’s Smith Square for the Early Opera Company. Thorpe was the bass cover in the world premiere of Shell Shock, written by Nicholas Lens and Nick Cave for La Monnaie, Brussels. He also performed in Monteverdi’s L’Orfeo (Plutone) for the Royal Opera House, Covent Garden and the Roundhouse. Thorpe played Gibarian in the world premiere performances of Fujikura’s Solaris in Paris, Lille and Lausanne and Britten’s Billy Budd (Lieutenant Ratcliffe) with Opera North.

On the concert platform Thorpe has sung much of the major oratorio repertoire and regularly performs throughout the UK and internationally; highlights include his debut at Tel Aviv Opera House, performing Israel in Egypt with Jerusalem Symphony Orchestra (Laurence Cummings), Handel’s Esther at the London Handel Festival and Handel’s Acis and Galatea with Basel Kammerorchester conducted by Paul Goodwin in Vienna and Paris, Bach’s Matthew Passion with Philharmonie Zuidnederland also conducted by Paul Goodwin, performances of Bach’s John Passion, Verdi’s Requiem, Mozart’s Requiem, Haydn’s Creation, Rossini’s Petite Messe Solennelle and performances at the BBC Proms.