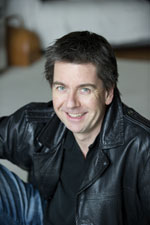 Born in 1961 in Berlin, Sebastian Weigle studied the horn, piano and conducting at the Hochschule für Musik ‘Hanns Eisler’. He was appointed first horn player of the Staatskapelle Berlin in 1982. In 1987 he founded the Berlin Chamber Choir and was artistic director of Neues Berliner Kammerorchester; in 1993 he became music director of the Junge Philharmonie Brandenburg; and from 1997 to 2002 he was Staatskapellmeister at the Berliner Staatsoper.

After several highly successful productions at the Frankfurt Opera—including Die Frau ohne Schatten, for which he was nominated as Conductor of the Year by the journal Opernwelt in 2003—Sebastian Weigle became music director there in 2008. He also was music director at Gran Teatre del Liceu in Barcelona from 2004 to 2009, where his performances of Parsifal and Korngold’s Die tote Stadt were especially renowned. In 2007 he made his debut at the Bayreuth Festival with a new production of Die Meistersinger von Nürnberg.

Sebastian Weigle has conducted at the opera houses of Berlin, Dresden, Mannheim, New York (Metropolitan Opera) and Vienna (Volksoper and the Vienna State Opera), and in Japan. In concert he has conducted the radio orchestras of Stuttgart, Munich, Berlin and Vienna, the Bamberg Symphony Orchestra and the major Scandinavian orchestras; he has also conducted in Melbourne, Tokyo and Chicago.