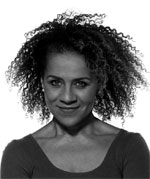 Chi-chi Nwanoku (the accent falls on the first syllable) was born in London of Nigerian and Irish parents, and is the oldest of five children. She spent most of her childhood growing up near Canterbury in Kent.

At the age of seven she discovered music on a neighbour’s piano when she was taught to play a 12-bar blues by her friend’s older brother. She returned to their house every day after school on the pretence that she wished to ‘play’ with her friend, but as soon as she was in the house all she did was hammer out the blues until told it was time to go home. A few weeks later the piano was wheeled up the road and given to Chi-chi as a gift!

A year later Chi-chi was ‘spotted’ by an athletics coach and took on intensive training as a 100-metre sprinter. She began competing at ‘national’ level, but this certain career ended very abruptly after ten years, following a knee injury. Fortunately her other passionate hobby as a pianist had continued alongside her athletics, and she was able at the age of eighteen to take up the doublebass and pursue a career in music. She studied at the Royal Academy of Music in London and with Franco Petracchi in Rome. She is now Principal Bass with the Orchestra of the Age of Enlightenment, and plays a lot of chamber music with various artists internationally. She is Professor of Double Bass Studies at Trinity College of Music in London and was made a Fellow of the Royal Academy of Music in 1998.

Chi-chi compiled a varied solo programme for the BBC Radio 3 series 'Tuning Up' and has been interviewed on 'Woman's Hour' and 'Kaleidoscope'. She was also featured as soloist on a BBC2 TV series called 'Strings, Bows and Bellows' and Channel 4's 'Shooting Stars'.

She lives in London with her two lively children, Jacob and Phoebe, who through their own shared interests have led Chi-chi back to ‘the track’ where she has begun to compete over 100 metres again—as a veteran!