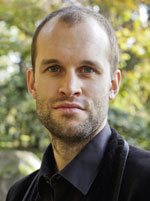 Ashley Riches was a Jette Parker Young Artist at the Royal Opera House, Covent Garden, and studied at the Guildhall School of Music and Drama, having previously been a choral scholar in the Choir of King’s College, Cambridge.

Ashley has performed at major concert venues and festivals including the Wigmore Hall, Barbican Hall and City of London Festival. He has sung with the Royal Philharmonic Orchestra, the Academy of Ancient Music (AAM), and Gabrieli Consort (including a UK premiere of Shostakovich's Orango), and performed Bach's Mass in B minor with Arcangelo at Flanders Festival in Ghent, and Britten's War Requiem with Novaya Opera, Moscow. He has recorded Pilate St John Passion (AAM), Mercury The Judgement of Paris and L’Allegro (Gabrieli Consort), and also appeared in David Starkey’s TV series Monarchy and Music.

Ashley’s opera appearances include the title roles in Eugene Onegin and Don Giovanni; Guglielmo in Cosi fan tutte (Garsington Opera); Marcello and Schaunard in La Bohème; Aeneas in Dido and Aeneas; Father in Hansel and Gretel; Tarquinius in The Rape of Lucretia; Sid in Albert Herring; Demetrius in A Midsummer Night’s Dream; and Polyphemus in Acis and Galatea. With the Royal Opera House, Ashley has performed Salieri in Rimsky-Korsakov’s Mozart and Salieri, Michael in the world premiere of Eichburg’s Glare, Morales in Carmen, Mandarin in Turandot, Baron Douphol in La Traviata, Officier in Les Dialogues des Carmelites and Osmano in L’Ormindo at the Globe Theatre. Recent highlights include Ashley’s English National Opera debut as Schaunard in La Bohème; his debut with Berliner Philharmoniker as Kreon in Oedipus Rex; Pollux in Castor and Pollux (St John’s Smith Square); Bach Weihnachtsoratorium (AAM); Mozart Requiem in Italy with John Eliot Gardiner; a tour of Matthew Passion with the Monteverdi Choir; and a world premiere of John Powell’s Prussian Requiem (Philharmonia Orchestra).