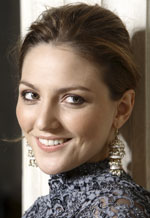 Spanish soprano Sylvia Schwartz is fast becoming one of the most exciting lyric singers of her generation. She has appeared at many of the world’s finest opera houses, including La Scala Milan, Wiener Staatsoper, Bayerische Staatsoper, The Bolshoi Theatre, Maggio Musicale Fiorentino and at the Edinburgh, Baden Baden, Salzburg and Verbier festivals.

Highlights of recent seasons include the opening of the Salzburg Festival with Nikolaus Harnoncourt; her debut at Carnegie Hall with Pierre Boulez; opera performances alongside Juan Diego Flórez and Rolando Villazón; a tour of Japan with the Vienna Staatsoper alongside Barbara Frittoli, Erwin Schrott and Marcelo Álvarez; the role of Maria in a new production of The Sound of Music at the Théâtre du Châtelet in Paris; concerts at the Verbier Festival alongside Bryn Terfel, Anne Sofie von Otter and Daniel Hope; and a major tour of the USA and Europe as part of a quartet with Bernarda Fink, Michael Schade and Thomas Quasthoff, accompanied by Malcolm Martineau and Justus Zeyen. Sylvia has also given recitals at Wigmore Hall, St John’s, Smith Square, Concertgebouw, Schwarzenberg and Verbier.