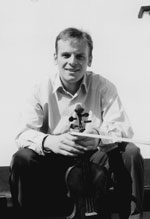 Violinist Benjamin Nabarro has been described by Musical Opinion as ‘an outstanding artist’. As a soloist and director he has performed throughout Europe, North America, Africa and the Middle and Far East, including appearances with the BBC Symphony, BBC Scottish Symphony, English Chamber and Scottish Chamber orchestras, and the Philharmonia. His concerto performances have won praise for their ‘purity of style, elegance of phrasing and unsurpassed perfection of technique’ (Musical Opinion).

Benjamin is a member of Ensemble 360 and The Nash Ensemble, with whom he has given concerts worldwide, and has made numerous recordings for the Hyperion, Dutton and BIS labels, among others. He is invited regularly to international festivals, including Schleswig-Holstein, Mecklenburg-Vorpommern, Nuremberg, Cheltenham, BBC Proms, Aldeburgh and Bath.