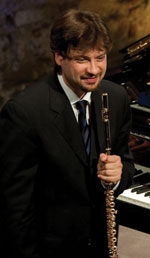 Described by Sir James Galway as ‘one of the best flautists of his generation’, Andrea Oliva is the principal flautist of the Orchestra dell’Accademia Nazionale di Santa Cecilia in Rome. Born in Modena in 1977, he graduated from the ‘Vecchi-Tonelli’ conservatory, where he studied with Gabrielle Betti. He has also studied with Claudio Montafia, Glauco Cambursano, Jean-Claude Gérard and Sir James Galway. Andrea Oliva is the winner of over ten international competitions, including the first prize in the competition held in Kobe, Japan in 2005. As a soloist, he has performed in some of the most important halls in the world: Carnegie Hall in New York, the Museum of Contemporary Art in London in the presence of Queen Elizabeth II, the prestigious Bunka Kaikan Hall in Tokyo, the Hong Kong Academy, and also in Chile and Cuba. He was a permanent member of the Gustav Mahler Youth Orchestra, and he attended the Herbert von Karajan Academy.

At the age of twenty-three he was invited by the Berlin Philharmonic to perform as Principal under conductors such as Claudio Abbado, Lorin Maazel, Valery Gergiev, Sakari Oramo, Mariss Jansons and Bernhard Haitink. Personally invited by Claudio Abbado, he has performed with Bologna Mozart Orchestra, at the academy of which he regularly teaches. From 2001 to 2003 he performed as principal flautist with the Orchestra del Teatro dell’Opera in Rome and, in this role, he presently collaborates with numerous orchestras such as the Orchestra del Teatro alla Scala in Milan, the Bayerische Rundfunk in Munich, the Chamber Orchestra of Munich, the Bamberger Symphoniker, the ORT in Florence, the Mahler Chamber Orchestra, and the Chamber Orchestra of Europe.

He has performed as a soloist with the Orchestra dell’Accademia Nazionale di Santa Cecilia in Rome, with conductors Christopher Hogwood, Myung-whun Chung and most recently in Nielsen’s Flute Concerto with Sir Antonio Pappano (broadcast on Italian television) and the Italian premiere of Marc-André Dalbavie’s Flute Concerto with Manfred Honeck.

Andrea Oliva is a member of GlobeDuo; he teaches at the Accademia di Santa Cecilia and gives many masterclasses around the world. For more information, please see www.andreaoliva.com. 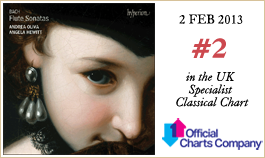