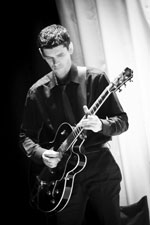 Latvian guitarist Kaspars Zemītis was born on 14 February 1973. His first instrumental training was on the clarinet at Cesis children’s music school. Later on he studied saxophone at Cesis Music College and the Jazeps Medins Music School in Riga under the guidance of professor Artis Simanis.

Originally self-taught as a guitarist he has played with a number of successful rock, jazz and funk bands, including Time after Time, Keksi and, currently, SweetWaterz, as well as working with such celebrated authors and musicians as Karlis Lacis, Linda Leen, Intars Busulis and Renars Kaupers. He has also worked with all the leading Latvian orchestras and has been involved in a number of music theatre projects in a long-term collaboration with the Daile Theatre in Riga, most notably Juris Vaivod’s music for Rudolfs Blaumanis’s Zagli (‘Thieves’) where the only instrument is a guitar.

In 2008 Kaspars began studying classical guitar with professor Julius Kurauskas at the Jazeps Vitols Latvian Academy of Music and in 2011 became the first person to be awarded a Masters degree in classical guitar from the Music Academy. For the last ten years he has also been a noted guitar teacher and workshop leader and regularly leads summer camps for children and young people to popularize the guitar in all its forms.