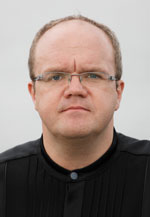 One of the leading conductors in Latvia, Māris Sirmais graduated from the Emils Darzinš Music School and obtained a bachelor’s degree from the Jazeps Vitols Latvian Academy of Music, where he studied with Ludmila Pismennaja. He also studied with Imants Kokars and in Graz with Martin Zighart.

In 1990 Māris Sirmais established the youth choir Kamer…, and since its foundation this choir has received more than one hundred awards. From 1992 to 1997 he worked with the Latvian Philharmonic women’s choir Dzintars, and since 1997 has been artistic director and chief conductor of The State Choir Latvija and the International Sacred Music Festival.

Māris Sirmais has appeared with The State Choir Latvija and Kamer… in many prestigious European festivals, where he also gives masterclasses and workshops. He has been awarded the Latvian Great Music Award ten times, the most honorable award in Latvian music, and has received the newspaper Diena’s annual cultural award on numerous occasions. In 2008 he received the Cabinet Minister’s cultural award, and for promoting the name of Latvia throughout the world he also earned the title ‘Riga citizen of the year’. Māris Sirmais is an honorary board member of the Latvian Academy of Sciences and the bearer of The Three Star Order.