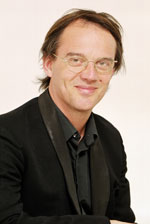 see also Richard Hosford (basset horn)
Born in Dorset, Richard Hosford was for four years a member of the National Youth Orchestra of Great Britain before gaining a scholarship to the Royal College of Music in London in 1979, where he studied with John McCaw and Thea King. In 1984 he received a Tillett Trust Award and in the same year was featured in The Park Lane Group's Young Artists Series.

As a founder-member and Principal Clarinet of The Chamber Orchestra of Europe, Richard Hosford has toured the world, performing as soloist in the USA, Japan, Hong Kong. Italy, Germany, Switzerland and the United Kingdom with conductors Claudio Abbado, Sir Colin Davis, Michael Tilson Thomas, Oscar Shumsky, Roger Norrington, Gerard Korsten and Paavo Berglund. He has recorded the Mozart and Copland Concertos with the Chamber Orchestra of Europe and Alexander Schneider for ASV records. In 1997 he performed the Nielsen Concerto with Paavo Berglund in Ferrara and Cologne.

Richard Hosford was for several years Principal Clarinet of the London Phiharmonic before taking the post of Principal Clarinet with the BBC Symphony Orchestra in 1994. This enables him to pursue his chamber music and solo career alongside his orchestral commitments.

Richard Hostord is a committed chamber musician and has recorded all the major repertoire for wind ensemble with the Wind Soloists of the Chamber Orchestra of Europe and has toured with them throughout the world. He is a leading member of The Gaudier Ensemble and has recorded many works for strings and wind with them. He is also a frequent guest of The Nash Ensemble.