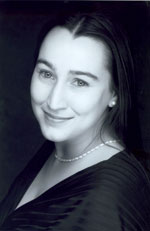 Sandra Medeiros was born in São Miguel in the Azores. She graduated from the Lisbon College of Music, where she studied with Joana Silva. Sandra continued her studies (with scholarships from the Gulbenkian Foundation and the National Cultural Centre) at the Royal Academy of Music in London, where she was a pupil of Julie Kennard and Clara Taylor. In 2003 she graduated with distinction and received her Postgraduate Diploma in Vocal Performance. Sandra’s prizes have included the Amanda von Lob Memorial Prize and second prize in the Bidu Sayão International Vocal Competition in Brazil in 2004.