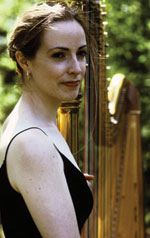 Praised for her ‘deft musicality’ and ‘truly astonishing abilities’, Sally is much in demand as both soloist and chamber musician at major venues and festivals throughout the UK and abroad. At the age of nine Sally won scholarships to attend both the Purcell School of Music and the Junior Department of the Royal College of Music. She continued her studies at the RCM with Daphne Boden, again as a scholar, and graduated in 2001 with first class honours and the Worshipful Company of Musicians’ Silver Medal for outstanding musical achievement. She also gained extra tuition from international harpists including Marisa Robles, Osian Ellis, Sioned Williams and Catherine Michel.

Sally has won numerous prizes including first prize in the 1999 London Harp Competition, and she was a finalist in the 1996 BBC Young Musicians Competition. She gave her debut recital at Wigmore Hall in 2002 and in 2003 she was selected for representation by the Young Concert Artist Trust (YCAT), only the second harpist to achieve this. Sally continues to give recitals at major venues and festivals throughout the UK as a soloist, with flautist Adam Walker and with the Sally Pryce Ensemble. As a member of the Live Music Now! scheme, Sally gave over 200 concerts in community settings across the country between 2002 and 2006. A keen advocate of expanding the repertoire for her instrument, she has given several premieres of new works and has performed with the contemporary ensembles Lontano and Okeanos.