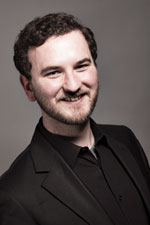 Christopher O’Gorman studied at the junior department of the Royal Academy of Music and then at the University of York, where he gained an MA in vocal studies with John Potter. As well as being an active performer of medieval music, he pursues a career both as a Songman in the Choir of York Minster and as an ensemble singer with a number of groups including the Gabrieli Consort, The London Quartet, The Binchois Consort, I Fagiolini, Ex Cathedra, Britten Sinfonia Voices, The Brabant Ensemble and the Ebor Singers. With these groups he has toured extensively in the UK, Europe and America. Performance highlights as an ensemble singer include singing in the first complete performance of Stockhausen’s final opera Mittwoch aus Licht with Ex Cathedra in Birmingham Opera’s production as part of the London 2012 Cultural Olympiad, and later repeated in the 2013 Proms season. He was also involved in Ex Cathedra’s collaboration with the Québécois dance company Cas Public in a choreographed performance of Duruflé’s Requiem.

As well as three Conductus recordings for Hyperion, his recordings as an ensemble singer have included several premieres of works by Roger Marsh and Kerry Andrew, and first modern performances of French Baroque music rediscovered by the musicologist Paul Gameson.