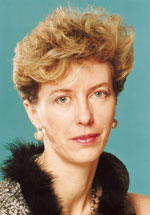 Cynthia Millar studied the ondes martenot with John Morton and later with Jeanne Loriod. Since she first performed the Turangalîla-Symphonie at the 1986 BBC Proms in London with Mark Elder and the National Youth Orchestra of Great Britain, she has played the piece well over a hundred times with many of the world’s leading orchestras all over Europe, America and beyond.

Cynthia Millar has worked with, among many others, the Los Angeles Philharmonic under both Esa-Pekka Salonen and Gustavo Dudamel, the Cleveland Orchestra under Franz Welser-Möst, and the Concertgebouw under both Mariss Jansons and Neeme Järvi. Further afield she has performed in Iceland, Singapore, Mexico City, Perth, Sydney, Wellington and Auckland.

Her repertoire also includes Honegger’s Jeanne d’Arc au Bûcher and Messiaen’s Trois petites liturgies. Cynthia Millar has played in more than one hundred film and television scores, notably for Elmer Bernstein (who encouraged her to learn the ondes martenot and for whom she also often recorded as piano soloist, notably in Far from Heaven), Richard Rodney Bennett, Maurice Jarre, Henry Mancini and Miklós Rózsa. She also writes for film, television and theatre and her work in this field includes scores for films by Arthur Penn and Robert Wise.