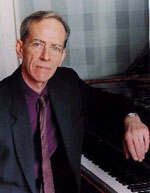 Hamish Milne was born and grew up in Salisbury of Scottish parents and studied with Harold Craxton at the Royal Academy of Music and then in Italy with Guido Agosti (who had studied with Busoni as a boy). At the Accademia Chigiana in Siena he was lucky enough to hear the classes of Casals, Cortot and Segovia at the end of their lives and, in particular, to hear those of Sergiu Celibidache, which made a deep impression on him: ‘I would like to be able to play the piano like Bill Evans and Ahmad Jamal; but then I would also like to be able to sing like Flagstad—some things are just not possible.’ His interests included film, books, people and cricket, ‘in a completely eclectic and disorganized way’.

Hamish Milne appeared as soloist with most of the leading British orchestras and gave over two hundred broadcasts for the BBC. He was also well known as a chamber musician.

Hamish recorded for Chandos, CRD, Danacord and Decca, as well as for Hyperion. His Hyperion recor­dings include piano concertos by Joseph Holbrooke and Haydn Wood (CDA67127), described by Gramophone as ‘superlative … an altogether exemplary release’; the two piano concertos by Sergei Lyapunov (CDA67326), recommended by Gramophone for being ‘as beautiful as it is comprehensive’; a disc of solo piano music by Anatoly Alexandrov (CDA67328), hailed by International Record Review as ‘altogether exceptional playing’; a collection of Russian transcriptions of Bach (CDA67506), about which Fanfare said ‘Milne plays the more outgoing works with the sharp articulation and gestural clarity that makes his Medtner so refreshing’; and cello sonatas by Moscheles and Hummel with Jiří Bárta (CDA67521), described by BBC Music Magazine as ‘a must for adventurous cellists and listeners alike’.