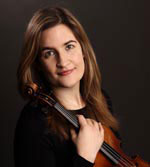 Born in London in 1976, Laura studied with Itzhak Rashkovsky at the Royal College of Music, London. Prizes include the Royal Over-Seas League, Musicians Benevolent Fund, Manoug Parikian Award and the TWIYCA Competition, resulting in her South Bank Recital debut. In 1994 she co-founded the Belcea Quartet and was a member for 16 years. The quartet won first prize in the Osaka and Bordeaux International Competitions. Worldwide tours included regular visits to the States, Far East and throughout Europe as well as a five-year residency at the Wigmore Hall, London. Their numerous recordings for EMI Classics include Bartók, Janácek and Britten cycles as well as Mozart, Schubert, Brahms, Debussy and Ravel quartets and have won Gramophone, Midem, Edison and Echo Klassik Awards. Solo performances have included the Brahms, Bruch, Mendelssohn, Prokofiev (2nd) Concertos and the Barber at the QEH as part of the South Bank Bernstein Project. Laura has taught Chamber music at the Guildhall School of Music and Drama and Royal Northern College of Music, and plays the ex 'Nissel' Stradivarius of 1731. She joined The Nash Ensemble in 2010.