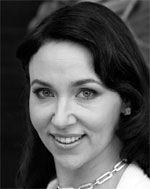 Christine Rice studied at the Royal Northern College of Music. Her many operatic roles have included the title role in Carmen, Emilia in Otello, the title role in The Rape of Lucretia, Sonyetka in Lady Macbeth of the Mtsensk District, Blanca in The Exterminating Angel, Judith in Bluebeard’s castle, Maddalena in Rigoletto, and Jenny Smith in Rise and fall of the city of Mahagonny, in addition to two premieres: Ariadne in Birtwistle’s The Minotaur, and Miranda in Adès’s The Tempest. She made her debut at the Metropolitan Opera, New York, as Giulietta in Les contes d’Hoffmann, and has appeared at many of the world’s leading opera houses, including the Bayerische Staatsoper, the Teatro Real in Madrid, Dutch National Opera, Teatro di San Carlo, Seattle Opera, Oper Frankfurt, Deutsche Oper Berlin and Glyndebourne Festival Opera, and in Zurich and Geneva.

Christine’s concert appearances include Verdi’s Requiem with the Philadelphia Orchestra under Yannick Nézet-Séguin, Messiah with The Handel and Haydn Society, St Matthew Passion with John Nelson, and the premiere of Harbison’s Closer to my own life with the Metropolitan Opera Orchestra at Carnegie Hall. She sang as Annio in La clemenza di Tito at the Edinburgh Festival under Sir Charles Mackerras, which was released by Deutsche Grammophon. Other recordings include Falla’s El amor brujo, Elgar’s Sea Pictures, Berlioz’s Les nuits d’été, an English song recital and Wolf’s Spanisches Liederbuch with Iain Burnside, a recital disc with Roger Vignoles, and Respighi’s Il tramonto with Sir Antonio Pappano.