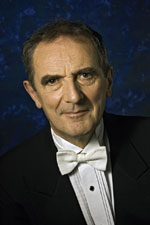 see also Ian Brown (conductor)
Ian Brown is a musician of great versatility whose career embraces chamber music, solo and duo playing and conducting. His musical life began as a bassoon player, eventually concentrating on the piano when he became pianist-in-residence at Southampton University. As concerto soloist he has appeared with many of Britain's leading orchestras playing a diverse solo repertoire from Bach to Rachmaninov and Bartók. Performances have taken him to the major European and Scandinavian countries, the Middle East, North and South America, Singapore, Hong Kong and Japan. As a duo partner he is in great demand, working with many musicians including Mstislav Rostropovich, Henryk Szeryng, Ruggiero Ricci, Elisabeth Söderström, Felicity Lott, György Pauk, Ralph Kirshbaum and James Galway.

He became pianist with The Nash Ensemble in 1978 and during this long association has played at all the important British music festivals. He has taken part in their annual Wigmore Hall series, each of which has explored the musical styles of particular countries including France, Czechoslovakia, Germany and Russia, among others. He has also recorded extensively with them, performing a large chamber music repertoire from Haydn to the present day.

He has performed much contemporary music and his interest in this field has led him to commission new keyboard works. He was the soloist in Messiaen's Oiseaux Exotiques at the Proms and toured Germany with the BBC Philharmonic Orchestra in concerts celebrating Hans Werner Henze's sixtieth birthday.