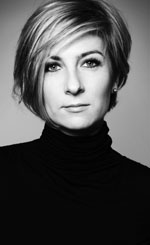 American soprano Kiera Duffy is recognized for both her gleaming high soprano and insightful musicianship in repertoire that encompasses Mozart’s Requiem and Coronation Mass, Schoenberg’s Pierrot Lunaire, Berg’s Lulu Suite, Handel’s Messiah, Ligeti’s Le grand macabre, Bernstein’s Candide, Vivaldi’s Gloria, Bach’s B minor Mass, and Boulez’s Pli selon pli. Ms Duffy has appeared with many of the major orchestras in the world under the batons of conductors such as Lorin Maazel, Pierre Boulez, James Levine, Michael Tilson Thomas, Roberto Abbado, Alan Gilbert, Kristjan Järvi, Andreas Delfs, and Leon Botstein. Ms Duffy also sings a variety of repertoire on the operatic stage: Cunegonde in Candide, Despina in Così fan tutte, Pamina in Die Zauberflöte, Lucia in The Rape of Lucretia, Florestine in Corigliano’s The Ghosts of Versailles, Rose in Carter’s What’s Next?, Queen Tye in Glass’s Akhnaten, Elvira in L’italiana in Algeri, Dew Fairy in Hänsel und Gretel, and Tebaldo in Don Carlo. In these roles, she has been seen at the Tanglewood Music Festival, Atlanta Opera, Wexford Festival, the Opera Company of Philadelphia, and many others. Ms Duffy made her Wigmore Hall recital debut in 2010 with tenor Andrew Kennedy and pianist Roger Vignoles in an all-Strauss programme and has been seen at the Marlboro Music Festival in collaboration with such famed chamber musicians as Mitsuko Uchida and Richard Goode. Ms Duffy was a finalist in the 2007 Metropolitan Opera National Council Auditions and is featured in the film The Audition. She was an accomplished pianist before pursuing singing and holds Bachelor’s and Master’s Degrees in Voice Pedagogy and Performance from Westminster Choir College. She is the recipient of numerous awards and recognition from such esteemed organizations as the Metropolitan Opera National Council, the Philadelphia Orchestra Greenfield Competition, Opera Theatre of St Louis, and the Young Concert Artists International Competition.