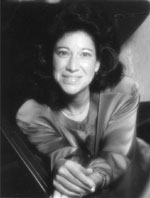 Over the past decade, the American pianist Mina Miller has been active both as a performer and musical scholar. A recognized authority on the music of Carl Nielsen, she holds a Doctorate of Philosophy from New York University. She presented the American premiere performance of several of Nielsen's piano works, and prepared a revised critical edition of Nielsen's complete piano music published in 1982 by Edition Wilhelm Hansen/Chester Music. She is also the author of Carl Nielsen: A Guide to Research (Garland Press, 1987).

A native of New York City, Mina Miller studied at the Manhattan School of Music where her principal teacher was Artur Balsam. Other piano studies have included work with Lucy Greene, Richard Goode and the late Arne Skjold Rasmussen of the Royal Danish Conservatory of Music. Her musical training also included master classes at the Accademia Musicale Chigiana (Siena) and the Mozarteum (Salzburg). She has performed as a piano soloist in major cities in the United States and Canada. Her first European tour in 1984 included recitals in Scandinavia and Great Britain. She has been a featured artist on American Public Radio and has also recorded for the BBC.

Mina Miller currently holds the position of Associate Professor of Music at the University of Kentucky where she has served on the faculty since 1977.