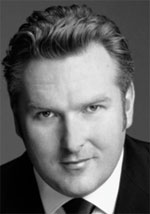 A native of New Zealand, Simon O’Neill has rapidly established himself as one of the leading helden-tenors on the international stage. Notable performances include: the title roles of Lohengrin and Parsifal; Idomeneo; The Bartered Bride; Die Zauberflöte; Glagolitic Mass; Stolzing in Die Meistersinger von Nürnberg; Tosca; Nixon in China; Götterdämmerung; and Beethoven’s Ninth Symphony. His debut performances as Siegmund (Die Walküre) at La Scala and the Berlin Staatsoper received critical acclaim.

Simon has performed at La Scala, Metropolitan Opera, Royal Opera House, Covent Garden, Berlin Staatsoper, Vienna Staatsoper, and Teatro Real Madrid, at the Bayreuth and Salzburg Festivals, and in Tokyo, San Francisco, Houston, and Sydney, with many of the world’s leading orchestras and conductors.

At extremely short notice Simon made his debut in the title role of Verdi’s Otello in concert at the Barbican with the London Symphony Orchestra, conducted by Sir Colin Davis (2009). His performance was widely acclaimed by critics, who described his portrayal of the infamous protagonist as ‘thrilling’, ‘a tremendous debut in the title-role, giving notice that he is the best heroic tenor to emerge over the last decade’.