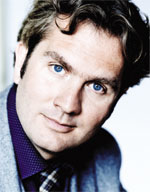 Born in Amsterdam in 1977, the Dutch baritone Thomas Oliemans graduated from the Amsterdam Conservatory, coached by Margreet Honig. He continued his studies with KS Robert Holl, Elio Battaglia and Dietrich Fischer-Dieskau.

In 2005 he made his debut at the Salzburg Festival as Gonsalvo Fieschi in Schreker’s Die Gezeichneten. Further important debuts followed in 2006 as Papageno (Die Zauberflöte) with the Opera of Nantes and Angers and at the Opera de Genève as Guglielmo (Cosi fan Tutte).

Most recent opera appearances include his debut at the Royal Opera House, Covent Garden in the role of Schaunard (La Bohème), Papageno (Die Zauberflöte) at De Nederlandse Opera; Marcello (La Bohème) and Eisenstein (Die Fledermaus) at the Opéra in Strassbourg; Figaro (Le Nozze di Figaro) and Figaro (Il Barbiere di Siviglia) both at Scottish Opera; Hercule in Gluck’s Alceste at the Aix-en-Provence Festival, Maximilan (Candide) and Tarquinius (The Rape of Lucretia) both at the Vlaamse Opera and Frank in Korngold’s Die tote Stadt at the Opéra national de Lorraine.

His discography includes Schubert’s Winterreise, as well as the CD ‘Mirages’ with song cycles by Francis Poulenc and Gabriel Fauré and Schubert’s Schwanengesang, both with pianist Malcolm Martineau. In orchestral repertoire in 2010 a CD was released with works by Frank Martin for baritone with the Stavanger Symphony Orchestra and conductor Steven Sloane as well as a live-recording of Bach‘s Johannes Passion with the Orchestra of the 18th Century.