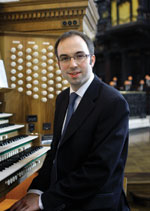 Simon Johnson is the Organist & Assistant Director of Music at St Paul’s Cathedral. ‘A brilliant and sensitive musician … achieving greatness through his calm demeanour’ (Gramophone), Simon’s work as a soloist, accompanist and choir director makes him one of the most versatile church musicians working today.

As an organist, Simon plays for all the important national services and events that take place at St Paul’s; this has included the funeral of Baroness Thatcher and the National Service of Thanksgiving to celebrate the Diamond Jubilee of Her Majesty the Queen, for which he also arranged some of the music. He is much in demand as a recitalist, having toured extensively in Europe and the United States, and has also worked with such groups as the London Symphony Orchestra, Royal Philharmonic Orchestra, London Mozart Players, City of London Sinfonia, London Baroque and The Cardinall’s Musick. Simon’s yearly extravaganzas for the Lord Mayor’s Show in London have seen the premiere of Guy Bovet’s Dick Whittington, and collaborations with Brian Blessed and Jo Brand (in Simon’s own arrangement of Prokofiev’s Peter and the Wolf). In 2008 he gave a performance of Messiaen’s La Nativité as part of the composer’s centenary celebrations by the Southbank Centre. And in 2012 he performed when the Dalai Lama received the Templeton Prize at St Paul’s.

As a conductor he was responsible for the music at the service commemorating the withdrawal of British armed forces from Iraq, broadcast live on BBC1 in 2009, and has recently conducted the choir of St Paul’s together the London Mozart Players in a performance of Bach’s St John Passion. Before arriving at St Paul’s, he was Director of the St Albans Abbey Girls’ Choir, leading them on several tours and making a number of recordings to widespread critical acclaim.

In 2011 Simon released a DVD about the St Paul’s Organ, in which one can ‘appreciate Johnson’s musical sensitivity, and deceptively easy fluency in even the most hair-raising of repertoire’ (Choir and Organ); ‘a remarkable demonstration of what is achievable on a DVD recording of an organ concert. The playing sparkles throughout’ (International Record Review), ‘spine-tinglingly sublime’ (Gramophone).