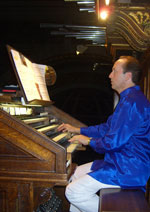 D’Arcy Trinkwon is acclaimed for his artistic mastery of the organ and his performances in festivals and concert series on modern and historic instruments worldwide have established him as one of today’s outstanding virtuoso organists. He has devoted himself to a concert career rather than the more customary association with a church or cathedral, and he is renowned for his dedication to bringing the organ and its music to a wider public without any musical compromise.

A musician of scholarship, his visionary performances, although meticulously researched and considered, express a rare personal emotional intensity for the music whilst at all times retaining respect for the traditions of the past. Commanding one of the most extensive repertoires of any artist before the public, he performs all the established masterpieces and has also given many premieres. These are all elements he stresses in his increasing love of teaching—both privately and as a guest of various conservatoires and colleges as well as in masterclasses.

Of South American and French ancestry, D’Arcy began piano lessons at the age of four and realized his musical vocation only a few years later whilst a chorister under Allan Wicks at Canterbury Cathedral: by the age of eleven he was led by a star—the organ. After studies with H A Bate in London, he continued his studies in piano and organ concurrently, later studying at the Royal Northern College of Music (Manchester) and the Paris National Conservatoire. He had several eminent teachers, concluding his formal training with Jean Guillou and Odile Pierre.