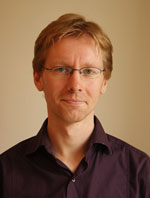 Jon Stainsby was a choral and academic scholar at Gonville and Caius College, Cambridge, and completed a doctorate in English literature at the University of Oxford before turning to singing full time. He is active as an oratorio soloist and recitalist, and as a member of ensembles such as the Academy of Ancient Music, the Choir and Orchestra of the Age of the Enlightenment, the Balthasar-Neumann Chor, Collgium Vocale Gent, Dunedin Consort, EXAUDI, and English Voices, with whom he appeared at the 2010 Festival Lyrique d'Aix-en-Provence. Recent operatic roles include Papageno (Mozart, Die Zauberflöte), Nick Shadow (Stravinsky, The Rake's Progress), Mr Gedge (Britten, Albert Herring), Father Augustine (Prokoviev, Betrothal in a Monastery) and Junius (Britten, The Rape of Lucretia). Jon has twice been selected to be a Britten-Pears Young Artist, studying Schubert Lieder with Christian Gerhaher and Gerold Huber, and Bach with Mark Padmore. His teachers have included Rudolf Piernay, Stephen Robertson, and Scott Johnson, with whom he continues to study at the Royal Conservatoire of Scotland's Alexander Gibson Opera School.