see also Richard Egarr (organ)
Richard Egarr brings a joyful sense of adventure and a keen, enquiring mind to all his music-making—whether conducting, directing from the keyboard, giving solo recitals, playing chamber music, or indeed talking about music at every opportunity. Music Director of the Academy of Ancient Music since 2006, Egarr is also Principal Guest Conductor of The Hague Philharmonic and Associate Artist of the Scottish Chamber Orchestra. He has a flourishing career as a guest conductor with orchestras ranging from Boston’s Handel and Haydn Society to the London Symphony, Royal Concertgebouw and Philadelphia orchestras.

Early in his tenure with the Academy of Ancient Music Egarr established the Choir of the AAM, and operas and oratorios lie at the heart of his repertoire. He made his Glyndebourne debut in 2007 conducting a staged version of Bach’s St Matthew Passion. Egarr is a lasting inspiration to young musicians, maintaining regular relationships at the Amsterdam Conservatoire, Britten–Pears Foundation, and the Netherlands Opera Academy. He is a Visiting Artist at the Juilliard School in New York.

Egarr trained as a choirboy at York Minster, at Chetham’s School of Music in Manchester, and as organ scholar at Clare College, Cambridge. His studies with Gustav and Marie Leonhardt further inspired his work in the field of historical performance. 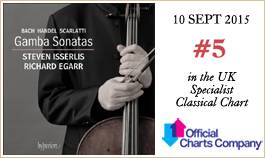