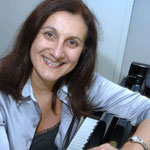 Helen formed a piano duo with Peter Noke which rapidly established itself as one of the country’s foremost ensembles, broadcasting frequently on BBC Radio 3 and making a number of recordings on the Hyperion label. Following the success of their recording of Dvorák’s Slavonic Dances they were invited to play in the famous Dvorák Hall in Prague. They appeared as soloists with many of the leading orchestras, including the English Chamber Orchestra, Philharmonia, Bournemouth Sinfonietta, BBC Concert Orchestras and the BBC Philharmonic. They toured abroad a number of times with several return visits to Australia and New Zealand and also appeared with the Tasmanian and Melbourne Symphony Orchestras, gave solo recitals at the Sydney Opera House and broadcasts for ABC Radio.

Helen has wide experience as a teacher and her reputation has ensured a steady and growing stream of talented pupils who have enjoyed success both at national and international level. Within the RNCM her students have won first prizes in all the major internal competitions including Beethoven, Chopin, John Ireland, Chamber Music, Piano Duo and the prestigious Recital Prize. Helen works as a Mentor for the Associated Board in their Professional Development Course and was the major contributor in setting up the specific course for piano. She has devised and directed the Music for Kids programme for children aged 3-8 years and most recently devised an educational programme for the Manchester City Art Gallery called Sound Pictures.