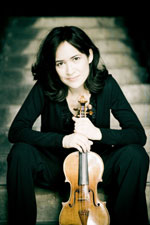 Munich-born violinist Viviane Hagner has won exceptional praise for her highly intelligent musicality and passionate artistry. Since making her international debut at the age of twelve, and a year later participating in the legendary ‘joint concert’ of the Israel and Berlin Philharmonics (conducted by Zubin Mehta in Tel Aviv), Viviane Hagner has acquired a depth and maturity in her playing that is reflected in her serene stage presence. She has appeared with the world’s great orchestras including the Berlin Philharmonic, the Boston Symphony, the Czech Philharmonic, the Leipzig Gewandhaus, the Munich Philharmonic, the New York Philharmonic and the Philharmonia, in partnership with conductors such as Abbado, Ashkenazy, Barenboim, Chailly and Eschenbach. As well as bringing insight and virtuosity to the central concerto repertoire, Viviane Hagner is an ardent advocate of new, neglected and undiscovered music. Composers whose work she champions include Sofia Gubaidulina, Karl Amadeus Hartmann and Witold Lutosl/awski. In 2002 she gave the premiere of Unsuk Chin’s Violin Concerto with the Deutsches Symphonie-Orchester Berlin and Kent Nagano, later taking the work to the United States. After the premiere of Simon Holt’s new Violin Concerto with the BBC Symphony Orchestra under Jonathan Nott in 2006, The Sunday Times wrote that she ‘caught the music’s soul’.

Viviane Hagner plays the Sasserno Stradivarius made in 1717, generously loaned to her by the Nippon Music Foundation.