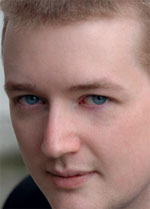 William Gaunt was born in Yorkshire and began his musical education there as a chorister at Ripon Cathedral. Following a choral scholarship to King’s College, Cambridge, where he read Classics, he has since held posts in the choirs of Christ Church, Oxford and Westminster Cathedral.

William has developed a busy and versatile career as both a soloist and a consort singer. In the latter capacity he performs and records regularly with many of the UK’s most prominent ensembles, including The Gabrieli Consort, The King’s Consort, Tenebrae, Alamire and Gallicantus.

As a soloist William performs much of the core concert and oratorio repertory, and has sung Puccini Messa di Gloria with Ite O’Donovan at the National Concert Hall, Dublin; Handel Belshazzar at the Proms for Sir Charles Mackerras; Bach Johannes-Passion, Purcell Come, ye Sons of Art, away and other odes with Paul McCreesh; Haydn Nelson Mass, Mozart Requiem, and Schumann Szenen aus Goethes Faust with Stephen Cleobury, as well as Fauré Requiem, Handel Messiah, Haydn Creation and Mozart C Minor Mass. Recordings include numerous performances with the choir of Westminster Cathedral, The Gabrieli Consort, and Monteverdi Vespro della Beata Vergine 1610 with Robert Howarth and the Orchestra of the Age of Enlightenment.