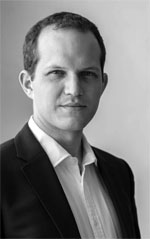 David Allsopp has established himself as one of the most versatile countertenors of his generation. A choral scholar at King’s College, Cambridge and a former member of Westminster Cathedral Choir, he has since performed and recorded extensively with Tenebrae, Polyphony and the Gabrieli Consort & Players. He continues to work closely with the Gramophone Award nominated early music consort Gallicantus, of which he is a founding member.

David is increasingly in demand as a soloist in the UK and internationally in repertoire ranging from the medieval to the modern. Notable credits include Arvo Pärt’s Passio (BBC Proms), Carmina Burana (in Milan and Malta), and Leonard Bernstein’s Chichester Psalms, which he has previously performed with Tenebrae.

But it is the music of Bach and Handel in which he has been most acclaimed. Oratorio credits include the St John and St Matthew Passions (Ex Cathedra, Nederlandse Bachvereniging, Nieuwe Philharmonie Utrecht, Noord Nederlands Orkest), Christmas Oratorio (BBC Singers) and Messiah (RLPO, Bournemouth Symphony, Huddersfield Choral Society). His ever-expanding solo discography includes Israel in Egypt, Joshua and Jephtha, and performances of Saul at the Liederhalle Stuttgart were described as 'angelic, expressive … he beguiled the audience from his first aria with tender phrasing, melting perfectly in duet' (Stuttgarter Zeitung).