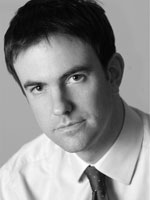 see also Matthew Martin (organ)
Matthew Martin was born in 1976 and read music at Magdalen College, Oxford, where he was organ scholar. After graduating in 1997, he went on to the Royal Academy of Music, London as a post-graduate student winning all the major organ prizes, and subsequently continued his studies in Paris with Marie-Claire Alain. He was recently elected an Associate of the Royal Academy of Music and is currently a teacher in keyboard skills and organ improvisation there.

In 2000 Matthew was appointed Organist and Choirmaster at the University Church of St Mary the Virgin and Assistant Organist at New College, Oxford before moving to Canterbury Cathedral in 2002 where he played for the enthronement of Dr Rowan Williams as Archbishop. Since 2004 he has been Assistant Master of Music at Westminster Cathedral. In addition to daily work with the cathedral choir, he organizes and gives many of the cathedral’s organ recitals. These recently included performances of the complete organ works of Jehan Alain over five concerts and Messiaen’s Messe de la Pentecôte and La Nativité du Seigneur.

As well as his busy schedule as a recitalist and director, Matthew is in increasing demand as a composer and his music is widely performed both in this country and further afield. Recent commissions have come from The Cardinall’s Musick, the choirs of Westminster Abbey and St Paul’s Cathedral, as well as a Mass to celebrate the Feast of the Dedication of Westminster Cathedral. Each year during August, Matthew directs the Nave Choir of boys and men as part of the Edington Festival of Music within the Liturgy.