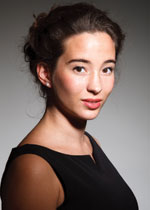 Katherine Watson was a choral scholar at Trinity College, Cambridge, where she studied Anglo-Saxon History and Literature. A year after graduating she won a place on William Christie’s Le Jardin des Voix and has since performed regularly under the batons of William Christie, Emmanuelle Haïm, Stephen Layton and Jonathan Cohen throughout Europe and further afield. In 2012 Katherine was a Young Artist with the Classical Opera Company and the recipient of Glyndebourne’s much coveted John Christie Award, appearing as Fairy/Nymph in Purcell’s The Fairy Queen and Diana in Rameau’s Hippolyte et Aricie. More recently, she has played the title role in Handel’s Theodora, the heroine Amélite in Rameau’s Zoroastre and Giunone in Monteverdi’s Il ritorno d’Ulisse in patria.

She has an extensive concert career and has worked with a number of eminent conductors. Highlights include programmes of arias from Giulio Cesare in France, Rameau arias in Frankfurt and the Far East, and a Monteverdi gala at the Festspielhaus, Baden-Baden. As a keen recitalist, Katherine regularly performs lieder and chansons by Mozart, Schubert, Mahler, Strauss, Poulenc and Messiaen.

She recently performed on a tour of Bach’s B minor Mass with Les Arts Florissants which culminated in a performance at the BBC Proms. Previous recordings for Hyperion include François Couperin’s Leçons de ténèbres with Arcangelo and Jonathan Cohen, and Bach’s Christmas Oratorio with Trinity Choir, Stephen Layton and the OAE.