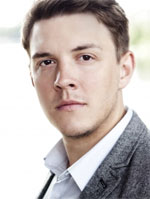 Jonathan’s concert work includes The Yeomen of the Guard with Jane Glover and the BBC Philharmonic at the BBC Proms, the title role in Telemann’s Orpheus with Ian Page and Classical Opera at the London Handel Festival, and Junior in Bernstein’s A Quiet Place with Kent Nagano and Ensemble Modern at the Konzerthaus Berlin.