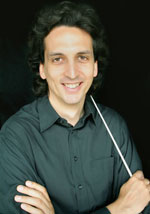 Michael Sanderling was born in Berlin. After his studies he enjoyed a successful international career as a cellist, and for many years he regularly performed as a soloist with first-class orchestras in Europe and the USA. In 2001 he made his debut as a conductor with the Berlin Chamber Orchestra. Since then he has become a highly sought-after conductor, praised by orchestras and the press in Germany and beyond.