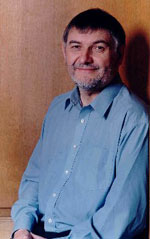 see also Peter Holman (conductor)
see also Peter Holman (harpsichord)
Peter Holman was born in London in 1946 and studied at King's College, London, with Thurston Dart. As a student he directed the pioneering early music group Ars Nova, and in 1979 he founded, with Roy Goodman, The Parley of Instruments, which is now recognised as one of the leading exponents of Renaissance and Baroque string consort music.

As a harpsichordist and organist Peter has performed with, among others, The London Handel Orchestra, the Tilford Bach Orchestra, the Orchestra of St John's Smith Square, and The Hanover Band. In 1985 he became Musical Director of the newly-formed Opera Restor'd which specialises in authentic productions of eighteenth-century English operas and masques. He is also the Artistic Director of the annual Suffolk Villages Festival which promotes high-quality performances of early music in a rural area of eastern England. In addition he was the joint Director (with Paul O'Dette) of the 1995 Boston Early Music Festival (USA).

Peter Holman was a professor at the Royal Academy of Music for ten years, and has also taught at many conservatories, universities and summer schools in Britain, Europe and the USA. At present he is Senior Associate Lecturer at Colchester Institute School of Music, a regular broadcaster on Radio 3, and much in demand as a lecturer at learned conferences. He spends much of his time in writing and research and has special interest in the early history of the violin family, in European instrumental ensemble music of the Renaissance and Baroque and in English seventeenth- and eighteenth-century music.

Peter regularly contributes articles and reviews to a range of newspapers and journals and has published many editions of early music. His book Four-and-Twenty Fiddlers: The Violin at the English Court, 1540-1690 (Oxford University Press, 1993) was awarded the Derek Allen Prize by The British Academy. Others publications include Henry Purcell (OUP, 1994), two chapters in Fairest Isle, recently published by the BBC in conjuction with its British Music year, a chapter in The Purcell Companion (London, 1995), a paper on a newly-discovered Purcell autograph in Purcell Studies (OUP), a paper on the surviving sets of parts of Restoration concerted music in Oxford for Performing the Music of Purcell (OUP) and a paper on the organ accompaniment of English consort music in John Jenkins and his Time: Studies in English Consort Music (OUP).