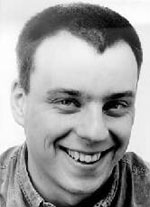 Matthias Goerne was born in Weimar, Germany, and began his stage and singing career as a member of the children's choir of the town's City Opera. In 1985 he began serious voice study with Hans Beyer in Leipzig, and later with Dietrich Fischer-Dieskau and Elisabeth Schwarzkopf. Since then he has been a prizewinner of several international competitions including the Robert Schumann Competition in 1989 (Second Prize), the Lindberg Salomon Competition and the Hugo Wolf Competition in 1990 (both First Prize).

In the spring of 1990 he was invited by Kurt Masur to sing the St Matthew Passion in Leipzig. In the same season he was engaged to perform with the NDR Radio Symphony Orchestra Hamburg. Matthias Goerne has performed with Horst Stein and the Bamberger Symphoniker and was invited by Wolfgang Sawallisch, acting on a recommendation by Dietrich Fischer-Dieskau, to sing in Paul Hindemith's Requiem. He made his début at the Leipzig Gewandhaus with the Radio Symphony Orchestra, Leipzig, conducted by Helmut Rilling with whom he has since been working regularly. He received enormous critical acclaim for his interpretation of Mahler's Des Knaben Wunderhorn with the Radio Symphonie Orchester Berlin conducted by Vladimir Ashkenazy. The Berliner Festwochen engaged him to sing Mahler's Kindertotenlieder which originally Dietrich Fischer-Dieskau should have performed. In June 1994 he made a highly successful début in Zürich with the Tonhalle Orchester under Claus Peter Flor, performing Brahms's Requiem at short notice.

As well as his many orchestra, oratorio and opera engagements, Matthias Goerne is giving an increasing number of Lieder recitals in Europe with the pianist Eric Schneider. He has given concerts in Amsterdam, Paris, Leipzig and Köln, receiving critical acclaim, and in July 1994 he made a highly successful début at Wigmore Hall.