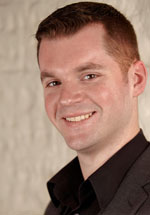 Edward Grint was a scholar at the International Opera School at The Royal College of Music. A former choral scholar of King's College, Cambridge, Edward is the winner of the 2011 Leith Hill Festival award and learns with Peter Savidge.

As a soloist, Edward has worked with many leading ensembles, both around the UK and abroad including the London Mozart Players, the City of London Sinfonia and the BBC Concert Orchestra. Recitals include Brahms' Vier Ernste Gesänge and Dvorák's Biblical Songs in St Paul's Cathedral, and programmes of Finzi, Vaughan Williams and Schumann in Croydon's Fairfield Halls.