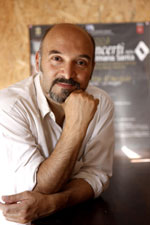 see also Carlo Ipata (flute)
Carlo Ipata received his musical training first at the Banff Center for the Fine Arts in Canada, then at the Royal Conservatory in The Hague, and finally at the Conservatoire national de région of Paris, where he got an honours diploma in baroque flute and chamber music.

With the ensembles Suonatori della Gioiosa Marca, I Barocchisti, Il Capriccio and Seicentonovecento, as well as the ensemble he founded in 1997, Auser Musici, Carlo Ipata has played at the European Festival of Ljubljana, the Italian Festival of Dortmund, Berliner Tage für Alte Musik, Festival Antiqua, the Musikinstrumenten-Museum in Berlin, Festivoce (France), the Miami Bach Festival, Celebrations of Boccherini (Madrid) and for Swiss Radio; he has also recorded for various labels including EMI and Amadeus, as well as Hyperion.

Carlo Ipata is dedicated to early-music research, and together with the ensemble Auser Musici he enables modern audiences to hear the music of composers such as Nardini, Gasparini, Barsanti, Brunelli, Boccherini, Lidarti, Campioni, Geraso, Porpora, Vincenzo Manfredini and Della Ciaia.

As director of the Tuscan Musical Treasures Project Carlo Ipata has worked with the musicology departments of the University of Cremona, the University of Pisa and the Scuola Normale Superiore, and the Italian Society of Musicology. He is one of the authors of Il flauto in Italia (Istituto Poligrafico dello Stato, 2005), and he has given courses and seminars at the New York University, at the CNR d’Angers, and in several Italian conservatories and musical institutes. He is professor of chamber music at the Rossini Conservatory in Pesaro.