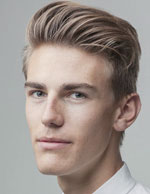 New Zealand baritone Jonathan Eyers is currently in his first year of the Opera Studies programme at the Guildhall School of Music & Drama, studying with Robert Dean. He previously completed his Master of Performances qualification there with Distinction, and also holds a First Class Honours BMus degree from the University of Waikato, where he was a Sir Edmund Hillary Scholar.

Jonathan has performed regularly as a concert and oratorio soloist in New Zealand, Germany, Norway, and the United Kingdom. Whilst living in New Zealand, Jonathan sang with NZ Opera, both as a chorus member and soloist, appearing as Billy in the world premiere of Harris’ Brass Poppies, Belcore (Donizetti’s L’elisir d’amore) and Malatesta (Donizetti’s Don Pasquale). On the London opera scene, he has appeared in the Grimeborn Festival at the Arcola Theatre, performed with British Youth Opera, and sung as a member of the chorus in Opera Holland Park’s productions of Puccini’s Manon Lescaut and Verdi’s Un ballo in Maschera.