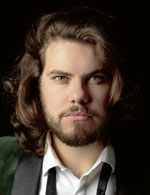 New Zealand tenor Thomas Atkins has attracted serious attention since his studies at the New Zealand School of Music and Guildhall School of Music and Drama, during which he was supported by the Kiri Te Kanawa Foundation and the New Zealand Arts Foundation Patronage. Atkins is a former Jerwood Artist, and a 2018 graduate of the Jette Parker Young Artist Programme at the Royal Opera House. Since then, he has made successful debuts with Bayerische Staatsoper, Opéra de Montpellier, Opera North, Gothenburg Opera, and New Zealand Opera.

Recent performances include Roderigo (Verdi Otello) at Bayerische Staatsoper; Tamino (Mozart The Magic Flute) and Kudrjaš (Janáček Káťa Kabanová) at Glyndebourne; and Rodolfo (Puccini La bohème) at Opera North, Gothenburg Opera, and New Zealand Opera. Away from the opera house, highlights include appearing in the Kiri Te Kanawa Foundation Gala at Wigmore Hall, London; his debut on Opera Rara as Empsaele (Donizetti Il Paria) with Sir Mark Elder and the Britten Sinfonia; Beethoven Missa solemnis with Richard Farnes and the BBC Symphony Orchestra; performances at the Yakushiji Otobutai in Japan with Dame Kiri Te Kanawa; and performances of Tippett’s A Child of Our Time, Mozart’s and Verdi’s Requiems, Handel Messiah, Dubois’ Seven Last Words of Christ, and Vaughan Williams’ Mass in G minor.