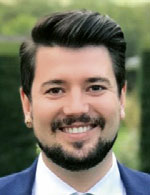 Frederick’s studies at the National Opera Studio were supported by a Young Artist Development Award from the Glyndebourne New Generation Programme. He is also a 2019 recipient of a Help Musicians K Sybil Tutton Award and a 2019 Independent Opera Voice Fellowship, and has been sponsored by The Todd Family Trust, the Tait Memorial Trust, and the John and Margaret Hunn Educational Trust. Competition success includes First Prize in both the Wellington Dame Malvina Major Foundation Aria Competition and the New Zealand Aria Competition.