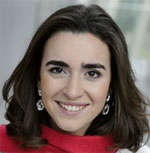 Born in San Sebastián, mezzo-soprano Carmen Artaza studied at Munich’s Hochschule für Musik und Theater and at London’s Guildhall School of Music & Drama (GSMD), and since October 2019 has been studying at the Hochschule für Musik und Darstellende Kunst in Frankfurt. In January 2021, she was awarded the First Prize, as well as the Mozart Prize, the Audience Prize, and three other special prizes, at the 58th Concurso Internacional de Canto Tenor Francesc Viñas. She has also won First Prizes at the Felix Mendelssohn-Bartholdy-Hochschulwettbewerb 2020, and at the Luis Mariano International Singing Competition in Irun, Spain in 2018.

She made her Salzburg Festival debut as Bradamante in the world premiere of Marius Felix Lange’s Der Gesang der Zauberinsel, as a member of the Festival’s Young Singers Project. Her operatic roles in Munich and at GSMD included Dorabella (Mozart’s Così fan tutte), Sesto (Handel’s Giulio Cesare), Bianca (Britten’s The Rape of Lucretia), Hermia (Britten’s A Midsummer Night’s Dream) and extracts from Puccini’s Madama Butterfly, Strauss’ Capriccio and Rossini’s La Cenerentola. On the concert platform, she has worked with the Munich Symphony Orchestra, London Symphony Orchestra, Mozarteum Orchestra Salzburg, Bayerische Kammerphilharmonie, Bamberg Symphony Orchestra, and the Konzerthausorchester Berlin. She has also recorded songs by Granados for BBC Radio 3.