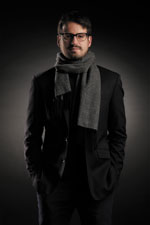 see also Tom Foster (harpsichord)
Tom Foster leads a busy career as both a soloist and a continuo player on harpsichord and organ. He has given recitals across the UK and has been a concerto soloist at the Edinburgh International Festival. Tom made his USA solo debut at Carnegie Hall in 2020, following up on his ‘dazzling’ (The Spectator) improvised cadenzas in Handel’s Rinaldo in a critically acclaimed performance given in 2018 at the same hall with The English Concert.

Respected for his sensitive and inventive continuo playing, Tom plays with some of the UK’s foremost chamber and orchestral ensembles. He is the principal keyboard player of The English Concert and is a guest with Arcangelo, the Academy of Ancient Music, Dunedin Consort, Early Opera Company, Ensemble Jupiter, Mahler Chamber Orchestra, Orchestra of the Age of Enlightenment, Scottish Ensemble and The Sixteen.

Tom began his musical education as a chorister at Manchester Cathedral before going on to study piano and subsequently harpsichord at Chetham’s School of Music, also in Manchester. He holds a first-class degree in Music from St Catherine’s College, Oxford, as well as a master’s degree in performance from the Royal Academy of Music, where he studied with Trevor Pinnock.