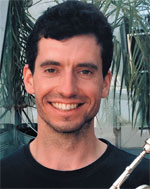 Jack Ross has played his trumpet in some unlikely places. He has played newly commissioned sinfonietta works in Tate Modern gallery, Gabrieli brass music from the towers of Trinity College, Cambridge, and has improvised in the centre of Stonehenge for summer solstice.

His playing encompasses numerous solo performances, orchestral works, music for brass quintet, stage and jazz bands. Highlights include Telemann’s trumpet concerto, Britten’s War Requiem in St Paul’s Cathedral under Richard Hickox, and Bach Magnificat on the natural trumpet alongside Robert Vanryne. He is even known to offer counter-melodies to reels and jigs within a ceilidh band.

Since graduating from Warwick University, he has played and taught trumpet in numerous settings. He currently lives and works in Bristol.