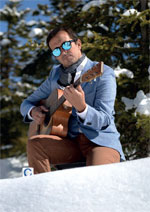 The lead vocalist for ALAN, and Project Manager for the Fantasy Recording, Matthieu graduated from the Paris National Conservatory of Music on the viola, and the CHOREIA school of Musicals, Paris. As professional musician, composer and body percussionist, he has worked on the French Snow White Musical "plus belle que toi" by Colette Roumanoff, for dance companies (Florence Lambert, Patrice Valero, Julie Sicard), did backing vocals for the French artist 'Camille'on the International Music Hole tour, and performed with 'Stomp' for the 'Cirque du Soleil' on the Bravo show, among others.

In 2016, Matt. joined the ALAN team as lead vocalist, music arranger, and composer. He debuted the ALAN Song, composed by Joi Barua, in Michele Dree's Jazz Tap performance at the Royal Albert Hall (Elgar Room) in November 2017. He was Producer and music director for the sixteen songs composed for ALAN the Musical, which were recorded in three separate periods between 2018-2019 at Abbey Road Studios, London.

In April 2019, Matt was appointed Musical Supervisor of the Staged Reading of ALAN the Musical by Brian Kite, then Chair of Theatre at the University of California, Los Angeles (UCLA) As Manager for this recording of the Fantasy, he has this to add of the Fantasy project: " ... uplifts everybody who is involved in the project."